At the Race Track

Two of the busiest weeks of racing in the Southeast kicks off in late July for the Annual Schaeffer's Oil Southern Nationals Series. Ed Lowe is the Schaeffer sales rep in charge and plans to attends every race. 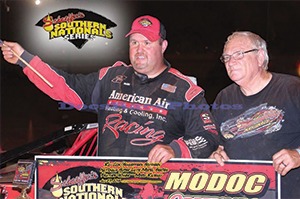 Ed services customers in northeast Georgia. He was born and raised in the Dahlonega area. Dahlonega boasts the first gold mint in the US.

The northern states have gelled-up fuel - not Georgia. Hot, humid Georgia causes "rotten" fuel. Sulfur was great at killing bacteria, but the industry has eliminated sulfur. The bacteria and fungus cause filters and injectors to clog. #285 Fuel Shock kills the fungus and bacteria in diesel fuel.

Diesel engines are "water makers". The heating and cooling of the fuel causes condensation. Ed can help you with the process of cleaning your fuel tanks and keeping them dry with #301 Tank Dry. The bacteria and fungus can also grow in your truck fuel tanks. Ed can help you manage your fuel mixture to keep your tanks clean.

For free shipping to your location of a $500 order, contact Ed Lowe.
Visit the retailers below for your off-the-shelf product.

Full-line retailer & will order what he does not have.