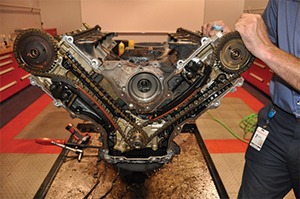 Schaeffer teamed up with Ranken Technical College to find out how a customer's million miles Ford 5.4L gasoline engine looks after running exclusively on Schaeffer Oil.

The experts were shocked to see the condition of this workhorse. Even the engine's main bearings still had the manufacturer's original numbers inked on them. 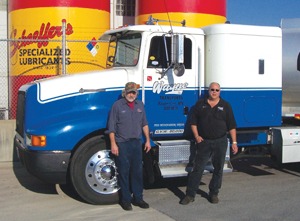 During a discussion about the truck's future, a Cummins NPower overhaul supervisor was surprised that Butch was still running an engine that was 700,000 mile rated. The only updates to his engine were new rods and mains due to scoring from a head gasket coolant leak at 500,000 miles. Put the Schaeffer Advantage to work for you and get more out of your equipment. 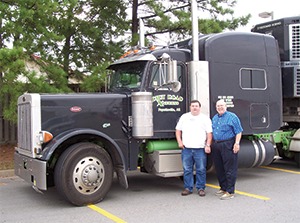 When Mike Cicero watched his custom 2001 Peterbilt 379 come off the line, he already knew he was going to protect his investment with Schaeffer's Specialized Lubricants. Six years and over a million hard miles later, Mike proudly confesses that Schaeffer's is the reason he can stay in business.
"The cost of doing business today can mean the difference between profit or loss," Mike said. He uses Schaeffer products on every moving part because it makes them last. "I use their (Diesel Treat 2000) fuel additive, motor oil, radiator treatment and greases. And after a million miles, the only things I've had to replace were three fan belts." Mike figures the fuel economy alone from Diesel Treat has given him a 1/2 mile per gallon more or 84,500 miles of free fuel. When he decided that a million miles on his fuel injectors were enough, he invited us in to take a closer look at their success. With new injectors, Mike says there's no doubt in his mind that the truck will go another million miles. 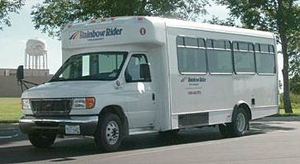