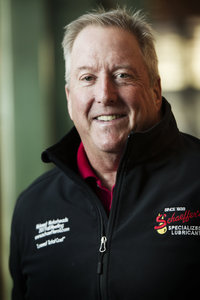 Chris Russell began his career as a Schaeffer Manufacturing Company sales rep in 2012. He was introduced to Schaeffer by a former business partner who used Schaeffer oil in a Suburban for 15 years and logged over 400,000 miles. Chris joined Schaeffer because he saw the benefits of the products and integrity of the company.

Chris earned a BS degree in Urban Planning Business Economics from Worcester State University. Prior to Schaeffer, his business took him all over the US and Europe. Chris says, "His company succeeded because of team effort. They did whatever was needed to get the job done." During the 9/11 terrorist attack, his team coordinated 480 mission assignments and logistics moves for FEMA and DOT. He is very proud to have been a part of the team that provided personnel, equipment and supplies to all three disaster sites.

Chris loves the outdoors and sports. His wife, Katy, runs a 3,000 acre private hunt club with the help of their English Setters and Labrador Retrievers.

Chris serves a diverse group of over 600 customers, from agriculture, excavating and construction to machining, industry and all points in-between. He sees Schaeffer as a company focused on helping customers to reduce total operating costs with superior lubrication and prevention practices.