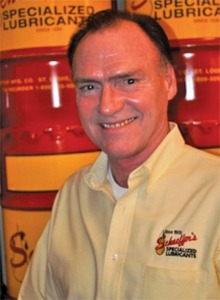 Dave Haggart received an honorable discharge in 1973 following service in Thailand and Vietnam with the United States Coast Guard. He has completed a machinist's apprenticeship with Henry Disston & Sons in Seattle, Washington and an auto/truck mechanic's apprenticeship with Great Falls area dealerships. He earned an engineering degree from Montana State University, in Bozeman, Montana. Dave has been with Schaeffer Manufacturing since February of 2009.
Dave was one of the local machinists hired to install the offset printing press at the Great Falls Tribune which is now one of his Schaeffer accounts. He also worked as a machinist fabricating drivelines and setting up differentials on articulating/oscillating, Michigan, military tractors. These 4-wheel-drive tractors were re-powered with Detroit/Alison components and sold as sub-soilers for farming.
As you can see, Dave is more than qualified to be on your team. Contact Dave for your equipment lubrication needs at (406) 788-3318.