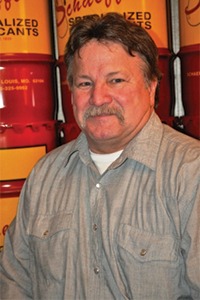 Prior to Schaeffer, Jerry worked in the automotive parts business for 20 years. He started in retail parts stores and then became Parts Manager for the local General Motors dealerships. Jerry grew up in Akron and operates Gil's Auto Supply at 619 East Main Street in Akron, IN. Jerry enjoys riding horses in his spare time.

Schaeffer leads the way with the latest and best technology in the lubrication industry. The focus is to reduce your overall bottom line, as much as 30%. Jerry helps his customers reduce their bottom line costs by using oil analysis and a by developing personalized lubrication strategy.