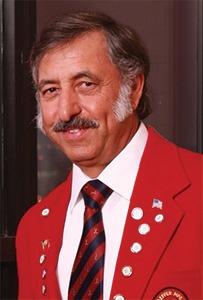 John Papancas became a Schaeffer Sales Rep in 1976. John was hired by a Schaeffer Sales Manager who staying in the hotel John managed. The opportunity of being an independent sales rep sounded good. The Sales Manager set the demo machine at John's feet and said, "Good luck". The customer at John's first sales call asked, "How does that machine work?" John replied, "I don't know yet". The customer said, "Well come on back and we will figure it out together." The customer sold himself a barrel of oil that day!

John is now a top producer at Schaeffer (see that snappy red coat). He is proud to offer the best products on the market. He can help you save on repair bills, use fewer parts and save on oil change costs. He is on your team, not on your payroll.

John was raised in Portugal and was about to return to his country when he met his wife, Debbie, and decided to stay. In 1981, they moved from Minnesota to California where he reestablished his Schaeffer business in Yuba City.